I’m under a tropical storm watch at the moment here at home, but there’s nothing left to do prep-wise … so might as well post about the week’s happenings in Soundslides-land.

The overlay inspector was in dire need of an update. It’s up now. It has all the same attributes as the previous interface, but it’s now responsive and easier to read and update.

Here are some screenshots: 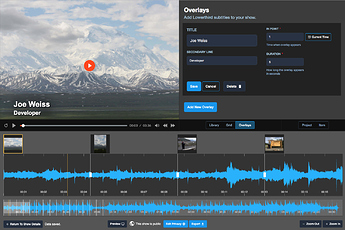 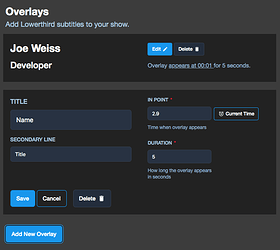 The application is currently limited to just one form of an overlay (a lowerthird type), but I plan to add more in the future. If you’ve got an idea for an overlay type (a title slide version seems practical), leave a comment below.

Now that the application is out of beta testing, it’s time to put some practical limits on the trial accounts. Everyone’s trial starts today no matter how long you’ve had an account. It’s a 14-day trial with a limit of 5 shows. I’ll adjust this as needed, and if you need more time reach out to me via email (joe@tungite.com) and I’ll extend it for you. As I said previously, it’s tough to decide on pricing tiers and to limit access for non-paid accounts. But tiers are necessary to pay the bills and keep the endeavor moving forward.

We’re in the forecast path of Dorian now. I’m not sure how much more we’ll get done this week. I’ll post a follow-up if needed. Stay safe everyone.

Joe. So appreciate your work. Will test out next week. Stay dry.

The rain has mostly stopped. We lost power and internet overnight, but everything is basically back to normal. We’re 60 miles inland in N.C., and got 50mph sustained winds for a few hours.

You deserve a return on your time. And…we know you will be fair. Thanks.