Quick update for the week as there were lots of “little” things on the list. First off, you can sort your images post-import in the initial grid view.

Previously, the sorting defaulted to the order in which the images were imported.

I’m hoping to add an “image creation time” sort soon, but for that, I need to first add some IPTC parsing of the image’s metadata.

I haven’t forgotten about all of the legacy shows up on the old Soundslides hosting system. How could I? There’s literally million of files and a decade’s worth of history!

The plan is to automatically migrate all of these shows to the new player sometime in 2020. But before I can do that, I need to make sure these old shows will render in the new player. For that, I’ve created a method where legacy hosting users can preview their shows now in the new player.

If you log into your account, you will now see a shiny new “Preview 3.0” button. Click on that to see the old show in the new player. 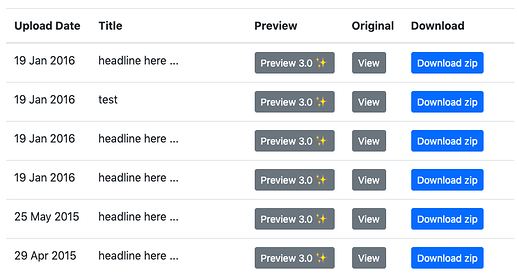 If you see any issues, with any of your shows, please let me know either here or via email at joe@tungite.com.

Hopefully you’ll never see error messages, but if you do, rest assured that they are better this week than they were last week

The main improvements are notifications when your computer can’t connect to the Soundslides servers (mostly when you go offline momentarily). The error messages for handling failed image uploads were also improved.

This one is a bit hard to describe, but there were certain rare scenarios where an image would “twitch” once while fading in or out (only seen in the exported video file).

It was essentially a one-pixel jump near the edge of an image. I tracked it down and it has to do with the way some non-standard aspect ratios were being recalculated. I’ve fixed the problem. No one ever reported this issue, but it was annoying if you experienced it.

If you’ve seen the issue with any of your exported video files, you can re-export your show to correct the problem.

That’s it for the week …

I wanted to check back in here and tell you that I really appreciate what you are doing. I just went on and editing a previous “test” piece and it worked splendidly.

I continue to tell people about this. Unfortunately I have stepped down from the non-profit that I founded, Young Writers Project, so don’t get into the schools much anymore. That would be a great place for kids to learn the concepts that are revealed by using this application.

Anyways, just wanted to tell you that you are not alone. That there are many of us out here who appreciate what you are doing.
geoff

It’s been gratifying to hear encouraging words from so many users, mostly over email. I’ll keep plugging away … and I’m very excited about what’s to come in the new year.

Yes - another appreciative user - though don’t use it as often as I would like (not enough of the presentations I use it for given).

A couple of these latest improvements will be very useful when I do.