Just a quick post to say that the remaining iPad-related issues have all been knocked out. You can now create and edit Soundslides shows on an iPad using Safari. 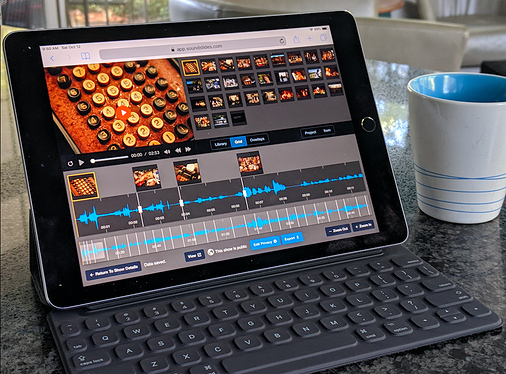 What’s different with Soundslides 3 on an iPad?

The only real difference you’ll see is a new dialog and button when launching the timeline editor. (You’ll only see this on iOS thankfully).

iOS requires users to click inside the browser window before the page can load an audio file. Soundslides 3 can’t display the timeline and waveform until the audio is loaded, so I had to add this “Begin edit” button for iOS devices. 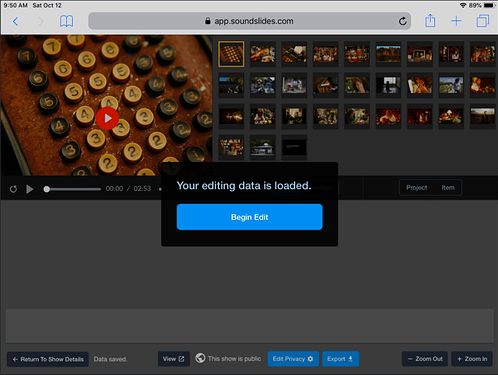 What versions of iOS and iPadOS are supported?

I tested everything going back to iOS 12.3.1 on full-size iPads and iPad Airs. I’m aiming to support “current minus one” versions of iOS.

What about loading media files into Soundslides on iPad?

This works exactly as it does on a real computer, except that you’ll get the extra options afforded by an iOS device (such as “Take Photo” and “Photo Library”).

Getting an audio file from iTunes to your web browser is an odd process, but that’s all due to iTunes. iOS restricts access to your own iTunes Music directories, so there’s nothing we do to improve that workflow.

I would strongly suggest using something like the Dropbox app in conjunction with media-creation applications like Soundslides when on an iPad. Having Dropbox as an import/export location is invaluable for getting files in and out of Safari on iPad. There are some new iPadOS-provided tools as well, but those new options are pretty rough around the edges. It might just be me, but it seems that Apple’s first release of a new version of iOS and macOS isn’t as well tested as it used to be. (macOS 10.15 Catalina especially has been painful).

How do I download my exported video to an iPad?

This stumped me. iOS doesn’t actually let you download an mp4 file straight from a web application to your iPad’s Videos folder. It’s a bit maddening and I suppose Apple has their reasons. When you click “Download Video” in Soundslides, iOS merely loads the video file in the web browser. From there, you have to click the “Share” button in Safari and then find an appropriate location in the Share activity dialog. Again, I’m using “Save to Dropbox” as my target location. 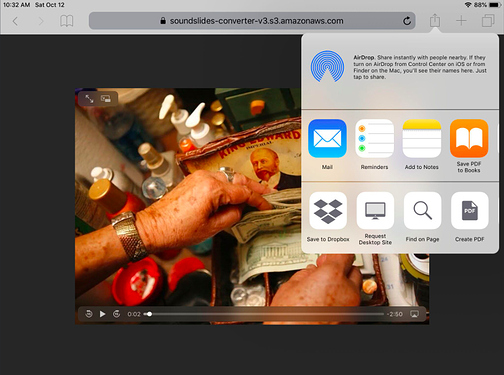 So what could make this more useful down the road?

I created a bunch of shows completely on the iPad. I made images using the iPad’s camera app, and I recorded my narration with the Voice Memos app. It works ok, but there’s a glaring hitch in the workflow.

I had to convert my narrations over to mp3 using some other audio application (or my laptop) … which is super lame. I need to add m4a as an accepted audio format and convert the file automatically. I’ve put that on my todo list.

Does this mean I can edit on an iPhone now?

Technically, you can load everything on an iPhone. I haven’t prevented people from using the app on a phone, but as a practical matter, the iPhone screen is just too small to render all the tools. I’ve used it in a pinch to add a new photo directly into a project from my iPhone camera, but it’s too tight a fit.

As always, give it a go, and let me know what you think?

Thank you for updating Soundslides to a non-flash version and for tablet accessibility!

Is there a way to make it so that image captions automatically come up without having to click the “i” icon? If not, is that something that might be able to be added in the future?

Hey, thanks! And welcome to the forum.

I’m so happy with how the iPad work turned out. I’m glad people are able to use it now.

Is there a way to make it so that image captions automatically come up without having to click the “i” icon? If not, is that something that might be able to be added in the future?

The original version had that feature. I’m not sure why I omitted it in the new interface …

I’ll put it on my todo list now. It shouldn’t be too hard to get that added as an option.

If not, is that something that might be able to be added in the future?

I released an update with this feature this morning.

You can activate the “Show captions by default” under the “Project” tab in the timeline editor. 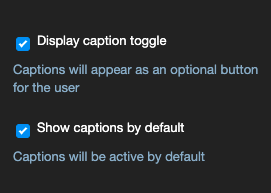 If your show is already published, just toggling that checkbox will update and republish the show.