Hey Joe - I’m really enjoying all the new features of your software. And your support has been excellent.

I have something I can’t figure out. My WordPress theme has some special coding considerations that I won’t bother you with here. Short story is I can use the “Exact Embed Code” and make it work responsively within an “embed module” the theme supplies.

Is there anyway for me to tweak your “exact code” so that an image of my choice is displayed (as a “teaser” image) instead of the default show image?

Is there anyway for me to tweak your “exact code” so that an image of my choice is displayed (as a “teaser” image) instead of the default show image?

There’s nothing like that built-in at the moment. The only workaround that comes to mind would be to put a kind of “cover image” as the first slide in the show, and set second slide to appear at 0:00.5 or so.

In the screenshow below, you can see how close I had to put the second image to the first in the timeline. I also set the second slide’s transition to be a straightcut, which makes the image appear instantly. 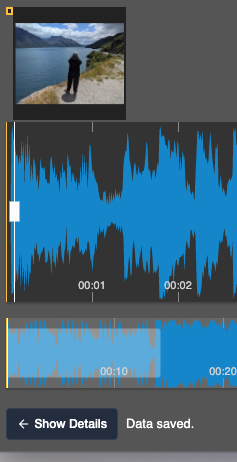 It’s a bit “hacky”, but it works, at least until I can explore getting a proper cover slide implementation. I’d love to setup something with great template designs and customizable play buttons.

I was pursuing a similar strategy (customizing and substituting the first slide) until I ran into the problem of not being able to delete slides anymore (another topic).

But as I hope you read elsewhere - I discovered that was a Safari/Catalna related bug - works OK in Chrome.